THE STUPIDITY VIRUS - COMING TO A BRAIN NEAR YOU! 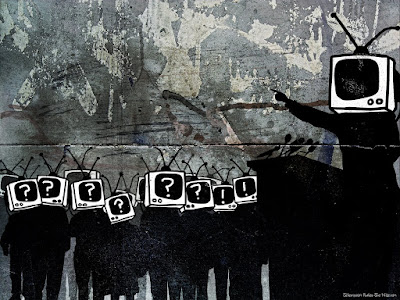 The Stupidity Virus is more rampant and much more dangerous/contagious than this H1N1 crap they're trying to freak out people with. In fact, it is one of the many reasons why there is a so-called global outbreak/pandemic in the first place. In one of my lines of work, I deal with it each and every day. I can't believe my ears sometimes, I mean, they say there ain't no such thing as a stupid question but lemme dispel the myths and tell ya the truth: YEA THERE IS!

What is The Stupidity Virus you might ask? Well, it's simple... Let's start off defining Stupidity, as per Meriam-Webster dictionary:

1 a : slow of mind : obtuse b : given to unintelligent decisions or acts : acting in an unintelligent or careless manner c : lacking intelligence or reason : brutish
2 : dulled in feeling or sensation : torpid
3 : marked by or resulting from unreasoned thinking or acting : senseless
4 a : lacking interest or point b : vexatious, exasperating

synonyms stupid, dull, dense, crass, dumb mean lacking in power to absorb ideas or impressions. stupid implies a slow-witted or dazed state of mind that may be either congenital or temporary <stupid students just keeping the seats warm> <stupid with drink>. dull. dense implies a thickheaded imperviousness to ideas . crass suggests a grossness of mind precluding discrimination or delicacy crass, materialistic people>. dumb applies to an exasperating obtuseness or lack of comprehension . suggests a slow or sluggish mind such as results from disease, depression, or shock
With that in mind, signs that someone has been infected and/or inflicted by The Stupidity Virus is when they ask you dumbass questions, questions that if they gave a little effort in thinking they could've figured it out themselves. For example, "I just recieved a new debit card, so just wanted to make sure, is it a debit card or a credit card?" or "How can I tell if I have a Money Order or Cheque, it does say cheque number on top...?". Need I say more? Also, a side effect of The Stupidity Virus is Laziness.... or is laziness the cause for The Stupidity Virus? That's kinda like what came first, the Chicken or the Egg. Whatevz.

All I know is that it's very evident there is much more stupid people then ever before. Believe me when I say I really don't mean to be so direct & harsh, but it's bewildering the level & degree of stupidity the world is increasingly (at an alarming rate) plagued with.

I truly believe that Television (a.k.a. Tell-A-Lie-Vision) is one of the BIGGEST reasons, if not THE reason, why Stupidity is becoming more Common than Common Sense and Common Courtesy. I am convinced that people have gotten so used to turning their mind off, and giving TV the power to do the thinking for them, that they've become too lazy to turn their mind back on and use their God-given brain to do the most basic level of thinking. It's really sad... and scary too. IF people become too stupid, and easily scared, can you imagine how easy it would be to manipulate the masses?! I'm sure, the 'powers that be', the ones behind all this, the architects and engineers of The Stupidity Virus are pleased with this... What better way to get what you want, screw over the people, and get away with it, then to render the population numb, dumb and fearful?! Right?! RIGHT!

For the sake of, as well as for the well being of our future children not to mention for the preservation of the freedom of humankind: PLEASE TURN OFF THE TV, TURN OFF MIND-NUMBING MUSIC THAT INFESTS YOUR MIND WITH USELESS GARBAGE, TURN ON YOUR BRAIN, OPEN A BOOK, READ READ READ!!!