THREE VERY SIMPLE THINGS THE U.S. CAN DO TO STOP ANY POTENTIAL THREAT OF "HOMEGROWN TERRORISM" 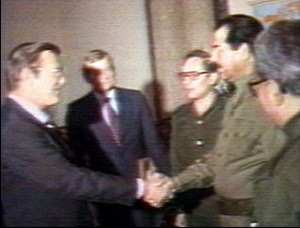 Please read the following article in order to get a better idea of what I'll be discussing in this post >>> U.S. Ponders How To Stop Homegrown Terrorism : NPR

Homegrown Terrorism... So Bush was fighting 'Osama and the Axis of Evil' and now Obama is dealing with 'Homegrown Terrorism' (amongst other things). What's next, an Attack from Outer Space? (Guess what, that's actually what the 'powers that be' are planning as we speak). You know what, for the sake of this blizzog, let's suppose that there is such a phenomena as 'Homegrown Terrorism' occurring within the U.S. (but trust me when I say, it's all a load of crap - I'll explain shortly), they're actually "pondering" how to stop it... ??? Well, you can't stop something or anything that does NOT exist... but like I said, for the sake of this blizzog, let's give these poor fear-mongering suckers benefit of the doubt, here are a few suggestions to solve their fictitious problem...

(Before I proceed any further, since this is a touchy subject, it is very crucial that I clarify something important before people start making wild accusation or allegations against me and try assassinating my peace-loving justice-seeking Faith-inspiring character: I do not, nor have I ever, nor will I ever endorse any act(s) of aggression, violence or terrorism against innocent group of civilians (regardless of nationality), nor am I in any way shape or form the least bit affiliated to any religious extremist/radical fundementalist group(s), I speak loudly and proudly against such vehicles of hatred, bloodshed and prejudice. I take no side but the side of God, and God's side is always with the innocent and the righteous. That being said, let's continue shall we)

THREE VERY SIMPLE THINGS THE U.S. CAN DO TO STOP ANY POTENTIAL THREAT OF "HOMEGROWN TERRORISM" (IF INDEED IT DID/DOES EXIST)
1): STOP OCCUPYING IRAQ AND AFGHANISTAN:
It's been proven time and time again, throughout humankind's war-rich history, when people are oppressed, it breeds elements of liberation. Some elements are freedom fighters, others just seek revenge. Why can't U.S. officials open their eyes and see, you reap what you sow, you create your own enemies by imposing your will elsewhere in the world were you originally don't belong in the first place! Just like Americans love their sovereignty, so do other people in the world, they have the same rights to freedom & liberty just as much as the American people do.

The reason why they won't leave Iraq and/or Afghanistan now or ever is because there is a hiden agenda behind all of this, they don't just spend millions to mobilize, in order to save the locals from a dictator, I truly wish it were the case but sadly it ain't so. There are plenty of places around the world where dictators rule freely, yet they're not interested in those specific countries either because it's not part of their plans (yet), or that they've already placed a puppet leader there and he's the dictator (cough Saddam Hussein cough) so it's only a matter of time before they go pillaging there too. So you might ask, what is this 'hidden agenda'... Good question, preperations for the arrival of the Anti-Christ. If you still think this whole existence is pointless, you seriously need to wake up... for your own sake.

2) STOP BLINDLY SUPPORTING EVERYTHING ISRAEL DOES, INSTEAD TRY ADOPTING A NEW HONEST APPROACH BY TAKING A FAIR UNBIASED STANCE.
From my understanding of Terrorism and its motives, it's usually in retaliation or intimidation or both. I'm not gonna give a history lesson about the Palestinian-Israeli conflict, but I will say that it is the major cause behind most of the world's problems today, from the terrorism to the market crashes. There's a reason it's called Holy Land, it is the heart of the world, and it's been bleeding out for many centuries. Research the roots of Israel, the bloodlines and the secret-society affiliations of its founding fathers, it might be scary what you find, but it will give you a bigger picture of the whole ordeal.

So coming back to my 2nd point on how to stop the (fictitious) threat of 'homegrown terrorism'. When you vehemently endorse behind closed doors the acts of an aggressor, sell it arms, finance its murderous existence, yet openly in public, you pretend to seek a peaceful resolution, that's called a hypocrite right? Well, U.S. Foreign Policy makers (whom I'm sure have not the interest of the American people at heart but that of AIPAC), specially the ones that give the impression of wanting to resolve the Palestinian-Israeli conflict, are some of the biggest hypocrites out there. Their hypocrisy is not only endangering Americans at home and abroad, but fueling the fire of radicalism and helping to breed more terrorism.

I am very confident that if the world can come together along with Palestinian and Israeli officials that actually do seek peace, with the help all diplomats and all moderate spiritual leaders for the purpose of resolving this matter, in a way which is fair and just to both Israelis and Palestinians (compromises & concessions on both ends must be made), and finally put an end to this innocent-lives-costing tragic predicament, it will take away le raison d'etre of many of these so-called radical fundamental extremists, hence, crushing terrorism once and for all.

But will that ever happen? As much as I pray for it and hope for it with every breathe, I know realistically speaking, the rift is too wide now, there is too much mistrust and animosity between the two concerned groups (Palestinians and Israelis), so it will be very tough, but it is possible though... if and only if both sides place their Faith in God, knowing that this is for the common & greater good of both their peoples. Will the powers that be allow it to happen? It could've happened a long time ago, but like I said, they have a specific agenda they follow, and a peace deal between Palestinians and Israelis doesn't not suit their interest(s). So sad, that a few people control most of the world like this... May God give them the punishment they truly deserve (and that's the only time I'll ever wish divine punishment unto anyone, but I know these people work for the devil so they'll earn the eternal hell's inferno that's already awaiting them.

AND FINALLY, THE LAST THING U.S. CAN DO TO STOP THE SUPPOSED THREAT OF "HOMEGROWN TERRORISM" IZZZZ.....

3) STOP LYING TO THEIR OWN PEOPLE AND TO THE ENTIRE WORLD ABOUT THE REAL MOTIVES BEHIND OF THE WARS, AND STOP TAKING US ALL FOR A BUNCH OF BRAIN-DEAD MORONS, WE'RE NOT ALL LIKE BUSH OHHHH!!! (I had to incorporate a bit of humor here, this blog was getting too serious, gotta lighten it up whenever I can, don't wanna be a downer, just an enlightener)

I think that last point is self-explanatory. We all know by now that Sept 11th was an inside job, too much evidence proves that the 'official' story was the biggest hoax ever. We also know by now that the primary motive to invade Iraq was NOT to liberate Iraqis nor to destroy the Weapons Of Mass Destruction (which were probably Made In The U.S.A. - where else do we manufacture war equipment? I'm just saying) or to remove (cough their puppet cough) Saddam Hussein from power (cuz they were done with him anyways).

If you still don't know what they were after in Iraq and Afghanistan, than you only need to consider the geographical location of each country, their natural resource(s), their neighbors, and which other small yet powerful nation that controls American Foreign Policy is also nearby within that region. Connect the dots my friends, I'll leave it as that.


So, to solve this imaginary dilemma of "Homegrown Terrorism", U.S. doesn't need to ponder, they need to Stop Occupying Iraq and Afghanistan and give those countries back their people (not to any puppet regime they place). They also need to stop blindly supporting a country accused of war crimes and adopt a fair, unbiased and balanced approach to solving the Palestinian-Israeli conflict. Finally, they also need to stop lying to their own Citizens and to the World and mistake us for a bunch of dumbasses like the elitist puppetmasters who have to keep things secret (God's sees EVERYTHING by the way) cuz they're all a bunch of cowards... they don't have to hear me or fear me, but they will face God one day, we all do, and our actions on this planet will speak for themselves. Literally.

Oh and for the record, there ain't no such thing as "Homegrown Terrorism", it's an engineered scare tactic as part of a fear-mongering faith-in-God abolishing campaign. They've infiltrated and cracked every religion, they've distorted their holy books, they've managed to drag many followers of Christianity and Judaism away from their respective religion and abandon their beliefs. Look around you, proof is every where you look. The powers that be see Islam as an enemy because it is the last Faith whose Holy Book the Qu'ran is still in its original form, word for word, protected by God... and that stands in the way of their demonic master, I shall not name that foul creature, it doesn't deserve space on my blizzog. As long as Faith exists, it threatens them and their 'god'. Believe what you want, but the truth is what it is, denying it won't make it go away.

Keep Faith people, Faith is our Protection against Evil, God Will NEVER EVER let you down or abandon you if you place sincere Faith in His Divine Will, as long as it comes from the bottom of your heart and the depth of your soul, that's what counts. On that note....

Peace, Respect, Much Love
and always in all ways
MAXIMUM BLESSINGZ.

©2009-2090 M.O.E.C.A.S.H.. All Rights Reserved. No Parts of or the entirety of this composition may be reproduced and/or published elsewhere without the proper consent, authorization and approval of its author. Thank you very much for your cooperation.