MASTA KHALIFA & THE "BACK TO THE BASICS MIXTAPE" [IntrospectiveRecords™News] 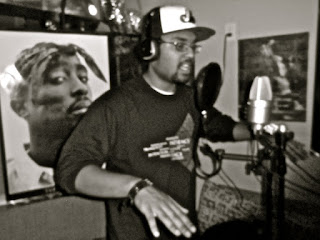 This past summer I linked up with Masta Khalifa 'The Astro-Lyricist', and we joint forces to collaborate on his ever recording project, the 'BACK TO THE BASICS MIXTAPE'. We even did a last-minute collabo on stage at the 'MuslimFest' in Montreal, safe to say we had stage chemistry and we rocked the crowd.
Well, lemme tell you a lil' bit about my homey...
Masta Khalifa is a 17 y.o. Lyrical MCee with much versatility, he got Flow, he Drops Real Knowledge and most importantly, he's True to the Art (and science) of Hip-Hop. I mean, I've worked with many dope lyricists in my time, but I gotta say, it was a blast to be in the studio with MK. From a Producer's standpoint, he has a really good work ethic, really well organized, serious about his craft yet fun to work with. I'm honored to have him on board my label "Introspective Records" as one of the youngest in the roster, he certainly demonstrates maturity when it comes to his music.
As for his tracks... lemme just say this, the only reason you won't like Masta Khalifa is if you're tone-def or a hater or don't have an appreciation for REAL & CONSCIOUS HIP-HOP from the Underground. He spits raw, but also got verses for the ladies on there, he showcases his love & passion for rhyming and not to mention, he makes it real clear that he's a Lyrical Force to Fuck With. Together, We Are Taking Back HIP-HOP from the fools that drowned it in commercialism by reminding the Youth what it's REALLY about: SPEAKING THE TRUTH!
That being said, I'm in the final stages of mixing down his tracks, and we will drop the "Back To the Basics Mixtape" in the next few DAYS. So, stay on the look out, and I'mma definitely hook everyone up with a free - yea, you heard that right, TOTALLY FREE - copy of the mixtape, which will be available to download online.
Make sure y'all link up to his official Myspace Page as well as to his Facebook Fanpage dedicated to all his haters and supporters.
Keep your eyes & ears glued to Masta Khalifa, cuz this is definitely just the beginning for this young yet very bright talented MC. As he would say: Word is Bond, dun!
Here's a lil' sumthin' sumthin' we recorded just after our collabo performance at the MuslimFest......
SPREAD THE WORD: THE ASTRO LYRICIST HAS LANDED ON EARTH!