THE MATRIX OF "REALITY", BY INFINITE ONE [SpecialFeature]

THE MATRIX OF "REALITY"
by Infinite One 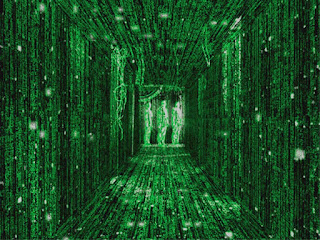 Being obsessed with and run by [usually technological] advancement leaves no room for ever being at peace and existing as something other than a machine which is endlessly processing and categorizing. Having the system of symbolism reality being run on the computer program called imagination, the human mind uses codes, images, rules and ideas to form its "reality", rather than what human used to do - use real-world things like nature, instinct, input and natural interpretation to form reality.

The ones who accept and continue using the computer program (which is developed and distributed by the collective dominant culmination of the generated imagery of society, government, institutions, media, etc) are called normal (they have been normal*ized* and *act* normal). The ones who either were never born into the system, or were but have since entirely broken out if it and snapped back to true, pure, reality (which ignores suggestive persuasion, "ideas-as-facts", labels, social categories, socially-accepted-"truths", etc. etc.) seem, to all of the "normalized" people to be *ab*normal and crazy and therefore get labeled as defective and are ridiculed, outcast and destroyed.

This kind of gang warfare and world-wide mob mentality in the Earth game allows the masses to be manipulated by what we call magic - the casting of an idea (spell), which then forms into reality across the world. The mind is colonized from birth onwards by the current prevalent version of the system thus creating the outermost identity of the egoic self in its image, which is what (or "who") functions in this system. Similar to what is depicted in The Matrix, Tron, Avatar - where they all go into or play characters/roles inside the system. Here the soul becomes dormant like a seed, waiting for the box/pot to break so the plant can grow. The formation of the ego and it's entry into the system causes the mind to be recruited and fight (perceptively to the death) for what it believes I.e. this "reality" and the status quo.