THE RED PILLS V. THE BLUE PILLS: THOSE WHO SEE THE MATRIX, AND THOSE WHO DON'T 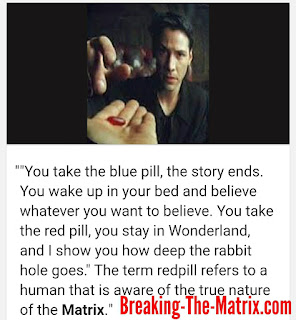 Bluepills believe everything MSM and the gov tells them, they live in the rat race, they shape their identity by what they own and wear and drive and where they live and associate their success to their bank accounts and stature, they are in the pursuit of shallow superficial material meaningless success which offers zero spiritual growth, they don't seek to expand consciousness, they are way too comfortable living in denial of all the rampant corruption and injustices, they choose to believe that they are powerless, they have a tendency to be apathetic or indifferent to the suffering of others, it's all about feeding their ego, and the only form of spirituality they seek is one which limits them to the secure confines of conformity.

The redpills, they are few but their numbers are steadily growing. They seek to awaken others as they themselves continually strive to achieve higher consciousness and enlightenment. They see things as they are, they do research, they investigate, analyze, ask questions and revise their original preconceived indoctrination of themselves and the world. They pose a threat to the power structure of the elites, they don't conform and aren't afraid to overcome cognitive dissonance when and if ever it arises. They are God's warriors, who believe in the hard undeniable proof of the existence of one Higher Divine Intelligent Creator and willingly submit to reconnect their Spirit, mind and heart to that source energy field. They don't fall for politricks,  they want the best for all of humanity and the planet.