THE CENSORSHIP GESTAPO: A CONCERTED EFFORT BY ALL THE MAJOR SOCIAL MEDIA GIANTS TO SILENCE TRUTH PAGES 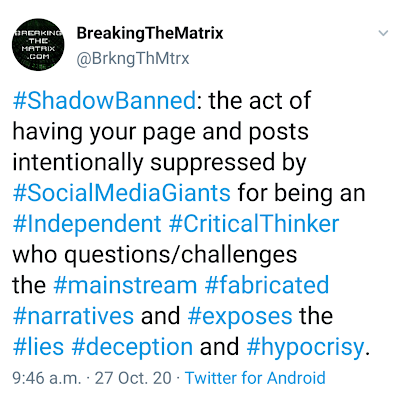 This past week, YouTube deleted 2 of my videos, both of which presented undeniable verifiable facts regarding child trafficking and its connections to the higher echelons of Washington and Hollywood. They deemed them 'harassment, threats and cyberbullying', which is totally false since nothing of that kind was portrayed or promoted or insinuated in those videos. But apparently it's okay to have pedo-friendly content on that streaming platform, just don't expose the pedophiles and child traffickers hiding in the Shadow Government / Deep State.

Also, in the past couple of weeks, Instagram has been on a rampage. They've been very busy shadow-banning pages which expose the New World Order / Deep State / Rothschild Antichrist Messianic Zionist Satanic Cabal / Big Pharma / Bill Gates. And they've even gone so far as to delete these pages. They've actually deleted (or as they call it 'disabled') 3 pages I highly respect: FawkesTruth, TheFailAcademy (who was a special guest on my podcast several times) and Ali Zeck (who is an upcoming guest on the podcast). Instagram doesn't give a shit about Freedom of Speech, Freedom of Expression, The Constitution, it's clear they have an agenda to shut down anything that's not in alignment with the Authoritarian Totalitarian Orwellian Draconian NWO agenda. They've even deleted a back-up page I had and started using more frequently because they are shadow-banning my main account, which I feel they might delete soon. In case that happens, make sure y'all are connected to my other accounts on Patreon, Parler, Minds, Bitchute, LBRY, Pocketnet, Medium, Vocal Media and others. I know, it's a lot of sites, so join whichever ones you want.

What pisses me off is how Instagram has no regard for the time, patience, energy and dedication we put into building our pages up from scratch, only to have them deleted in an instant because they think we're spreading 'conspiracy theories'. If they only knew our intentions are genuinely humanitarian in nature because we care about our fellow brothers and sisters of humanity, so we do what we do, every day, sharing and posting content to elevate humanity's collective consciousness, not for likes or fame or fortune, but out of pure Universal Love. However, it seems that's a threat to the corrupt criminal status quo power structure who see us as a threat to their control over people's minds. We are Breaking The Matrix, shattering their false paradigms of left v right two birds of the same vulture illusion of choice, we are exposing their fabricated narratives to manufacture consensus/consent, we are freeing people's hearts and minds and liberating them to start finally and once and for all, THINK FOR THEMSELVES.

The Censorship Gestapo is what I like to refer to them as, they work AGAINST the people's best interest, they might refer to themselves as 'fact checkers' at times, but in essence, they are nothing more than paid shills working to enslave the minds of the masses and keep the people docile, apathetic and complacent through submissive compliance. That might work for now, but nothing and no one can ever stop an idea and a movement whose time has come. The Truth is The Truth and WE WILL NOT BE SILENCED. Come hell or high water, they can delete or disable our accounts, but like my Truth Warrior brother FawkesTruth said, for each account they delete, 5 more will pop up. We shall OVERCOME.

We've come to a point in time where you're either aware of what's going on or you're willfully willingly choosing to remain in complete denial and sheer ignorance to all the facts that are as clear as day. And soon, a day will come when all actions will be measured and 'judged' accordingly. Till then, keep faith, stay strong, never dwell in despair or misery, it might get frustrating, it will get tough, but you are NOT alone, we are all working to bring forth more love and light into this world.

Don't forget, link up to all the accounts I mentioned. Let's stay connected and stay uplifted. One Love. BLESS.