DISCLAIMER: I am not nor have I ever been a Trump/MAGA/GOP/Republican supporter.

Trump is getting hardcore censored on Twitter. I repeat, a sitting president is getting heavily censored by a tech company (it's a private company so technically, they can do whatever the fuck they want). Do I agree with what Trump says? No, not all the time (I agree with his statement that MSM news outlets are Fake News). Does he have a right under the Constitution to say it? YES. Unless he's spouting hatred, or bigotry, I will defend Freedom of Speech, even if what he says doesn't make any fucking sense. Censorship is what Dictatorial Tyrannical Regimes use to silence their opponents and dissidents. With Biden Harris, this will only get worse, especially with Agenda 21 / 2030 and Event 201 in play, as well as The Great Reset and Dark Winter on the way.

The question is WHY are they trying so hard to censor him? What are they so afraid of? What part of Trump's tweets are deemed a threat to the establishment? Is there some kind of agenda? Is he part of the agenda, playing a role? I'll let you decide that on your own. Not here to brainwash people. Yes Twitter, Facebook, Google are all private companies, they can do whatever they want, however this clearly points to a bias on their part, which favors one candidate over another, and that's considered a soft form of collusion and/or mass manipulation. 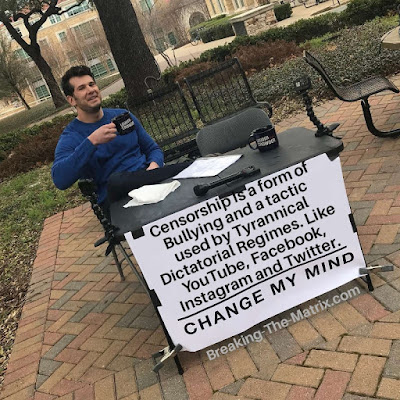 All these folks that were celebrating in the streets when Joe Biden was declared 'President Elect' (as per PROJECTIONS by CNN, not certified yet!) have absolutely no fucking clue what's coming and they will end up regretting their decision once they see how crippling and devastating a national mandatory police-enforced lockdown crackdown quarantine will be (which Biden fully supports). And the Biden Harris administration are undoubtedly in the hands of Big Pharma. Mandatory vaccinations??? Chipping??? Bill Gates is happy and excited for this win, that's reason for concern in itself.If Trump's campaign have hard evidence and physical proof that there has been election tampering or cheating, they need to present their case clearly and factually.  We The People demand transparency and accountability.

THE GAS-LIGHTING OF TRUMP ON '60 MINUTES'

If you've ever wondered what Gas-Lighting looks and sounds like, watch this interview of Trump on '60 Minutes' where at every possible turn at almost every question he's being asked, he gets interrupted and hard-balled, but it doesn't even phase him. He's used to it. The interviewer Lesley Stahl definitely shows her and the network's true colors: completely unprofessional, distastefully biased, and remarkably un-journalistic in every sense.

These are just some recent examples of how Legacy Media (aka MSM, fakestream, lamestream, zionistream, fakestream media) and Big Tech are working in collusion with the DNC/Democrats/Joe Biden campaign to try to derail, censor, gaslight and impede upon Donald Trump. Like I mentioned in the disclaimer: I have never been a Trump fan or supporter, I still see him as a puppet (go read previous posts), but I am and will always be a proponent of responsible & respectful Free Speech.

For those who don't know what gas-lighting is, it's basically when a person tries to intentionally anger/provoke someone else, gets the desired response, than acts like they are the victim when the person does finally get irate at them and they use that as an excuse to say "look, he's or she's the bad one here, I didn't do anything, I'm innocent, but look at how angry and/or violent this person got". Suffice to say, it is VERY immature. Only low frequency people use this dirty tactic to try and smear someone else's character and reputation.

DISCLAIMER: I am not nor have I ever been a Trump/MAGA/GOP/Republican supporter. 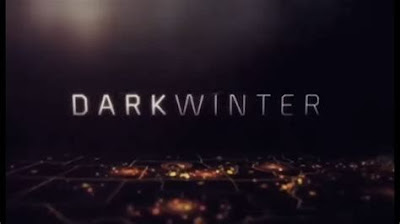 Many people ask and wonder what is 'Dark Winter'. To put it simply it's all tied to Event 201, Agenda 21 / 2030, and of course it is part of the New World Agenda agenda for Global Vaccinations and Depopulation.

On this "Real Talk With..." edition of Breaking The Matrix Podcast, my special guest is Ali Zeck. 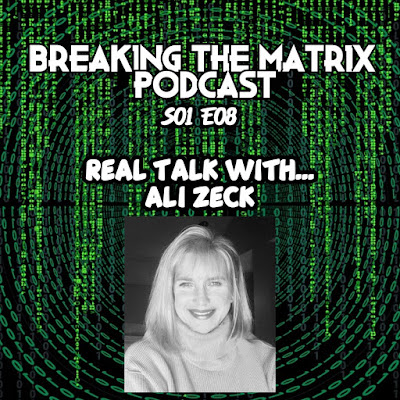 ﻿Ali Zeck is a health freedom, informed consent and trauma from relationship advocate who writes and speaks about her experiences to help others who may be suffering from mental health issues and toxic and abusive relationships.


She was erroneously put onto psychiatric drugs in college and was on and off them for the next two decades, and the drugs and her combined abuse and trauma led to numerous psychiatric hospital stays and suicide attempts. In 2016 she met a holistic psychiatrist, Kelly Brogan, who helped get withdraw from the psychiatric drugs. Ali radically changed her diet and her lifestyle to focus on really healing, and has spent the last four years healing the effects of the drugs and healing from very substantial relationship abuse.


She advocates for Informed consent for pharmaceuticals and vaccines and believes that the majority of mental illness we see today is a result of abuse, trauma, allergies to food , drug reactions, or other things that can be healed with an approach of seeking root cause.


Ali has been medication free for 4.5 years now.

We covered many important and profound topics during this episode.

Part 1: Mental Health and Toxic Relationships; Ali's courage to overcome and share her story to help others and her future plans:

Part 3: Parallels between Toxic Relationships and what's happening to Humanity on a Global Scale; and Ali's prediction for 2020 Election!:

The podcast is available on my channels on LBRY, BitChute and on various podcast streaming services. Unfortunately, YouTube has put me under strict restrictions for a couple of weeks because of all my videos exposing child trafficking and pedophilia rampant in Hollywood and Washington. You're not allowed to be a critical thinker or a citizen journalist on CensorTube!

To connect with Ali Zeck and follow her journey and show your support, here's where you can find her: 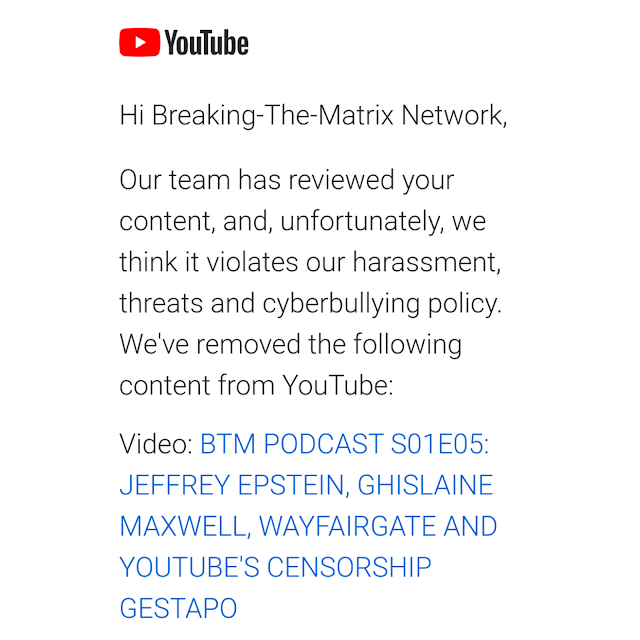 You gotta love the epic irony here. In one of my podcasts, I discussed YouTube's Censorship Gestapo, where they go around removing any content that is too critical for mass awakening, under the guise and totally false pretense that it's violating their policy of  zero tolerance for 'harassment, threats and cyber-bullying'. Honestly, who gave them the right to be the 'thought police' and none of the videos they've removed contained any instances of cyber-bullying, threats or harassment, absolutely none! So, it begs the question: What are they so afraid of? People becoming independent critical thinkers and not brainwashed drone goyim zombie consumerist sheep perhaps?
The video in question that they've removed is this one right here. Watch and judge for yourself if their claims are accurate or not.
What's really sad and pathetic about their futile attempts to keep censoring the truth, is that they are what they accuse us of. Their own Censorship is a form of harassment, threats and cyber-bullying. They think that they're the only video streaming platform out there? LOL. They might be the most popular but they're definitely not the only one where people can upload and share vital factual verifiable information in video format. I recommend BitChute and LBRY.
I you wanna lend a hand, go to your Twitter and retweet this and/or just share this post on your social media pages. Much Appreciated. 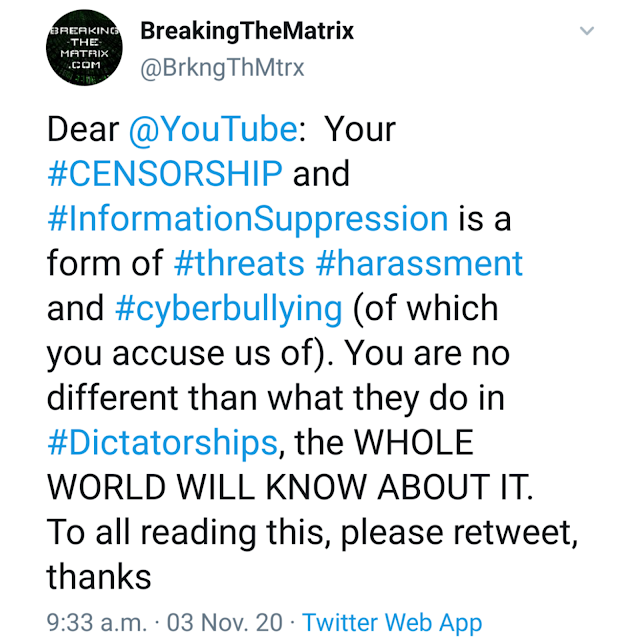